Dave’s wave and attempt at a smile sustained me during the drive to the larger hospital 40 minutes away.  As the life flight helicopter took off and raced my boy south for emergency brain surgery to stop the bleeding in his brain and stabilize him, I stood for a moment on the top of the hospital roof and just asked God for peace.  And I felt it, immediately.

By that time, my sister, Shannon, was by my side, holding my hand and said she would drive me to the new hospital as I didn’t have a car.  As we drove, I called my children and our elder and asked to be placed on the prayer chain. Dave was being lifted up within the hour by hundreds of people and the peace I felt about the new, unexpected journey that Dave and I were now on, was surreal.  I didn’t know how this day was going to end, much less the new path we were on, but I knew that somehow, we were going to be okay.

I made it to the hospital in record time and rushed inside to check on his status, expecting him to be in surgery.  To my amazement and surprise, they directed me to an emergency room and when I walked in, there, my fighting man sat, in the bed as the doctors and nurses continued to monitor his neurological status and vitals.  A doctor introduced himself as head of neurology and said that while Dave was in critical condition, he was already stabilizing and they had not seen any increased signs of distress in the brain since he had arrived. He was not sure why Dave was was awake and not declining, or what the next 30 minutes or even the hour held, but at that moment, they were going to wait on brain surgery and fall into a watch and wait pattern.  Thank you, Jesus. It had been a little less than 2 hours since Dave had called me in distress, and now he sat here, amazing the doctors with his status.  Dave was not well, but he was alive – another miracle!

The doctor then pulled up the CT scan of Dave’s brain – the one taken in the last 30 minutes, Dave’s second of the day, on the imaging board in Dave’s room and showed us what we were dealing with.  I am not going to lie; seeing the size of the blood pool in Dave’s brain was terrifying. Hearing the doctor say that he shouldn’t even be alive, much less awake and coherent, was nothing he could explain.  He was hopefully optimistic that Dave would continue to stabilize and that the bleed would not progress beyond it’s current borders. It was currently almost 2” x 2” and laying deep in the left side of his brain. 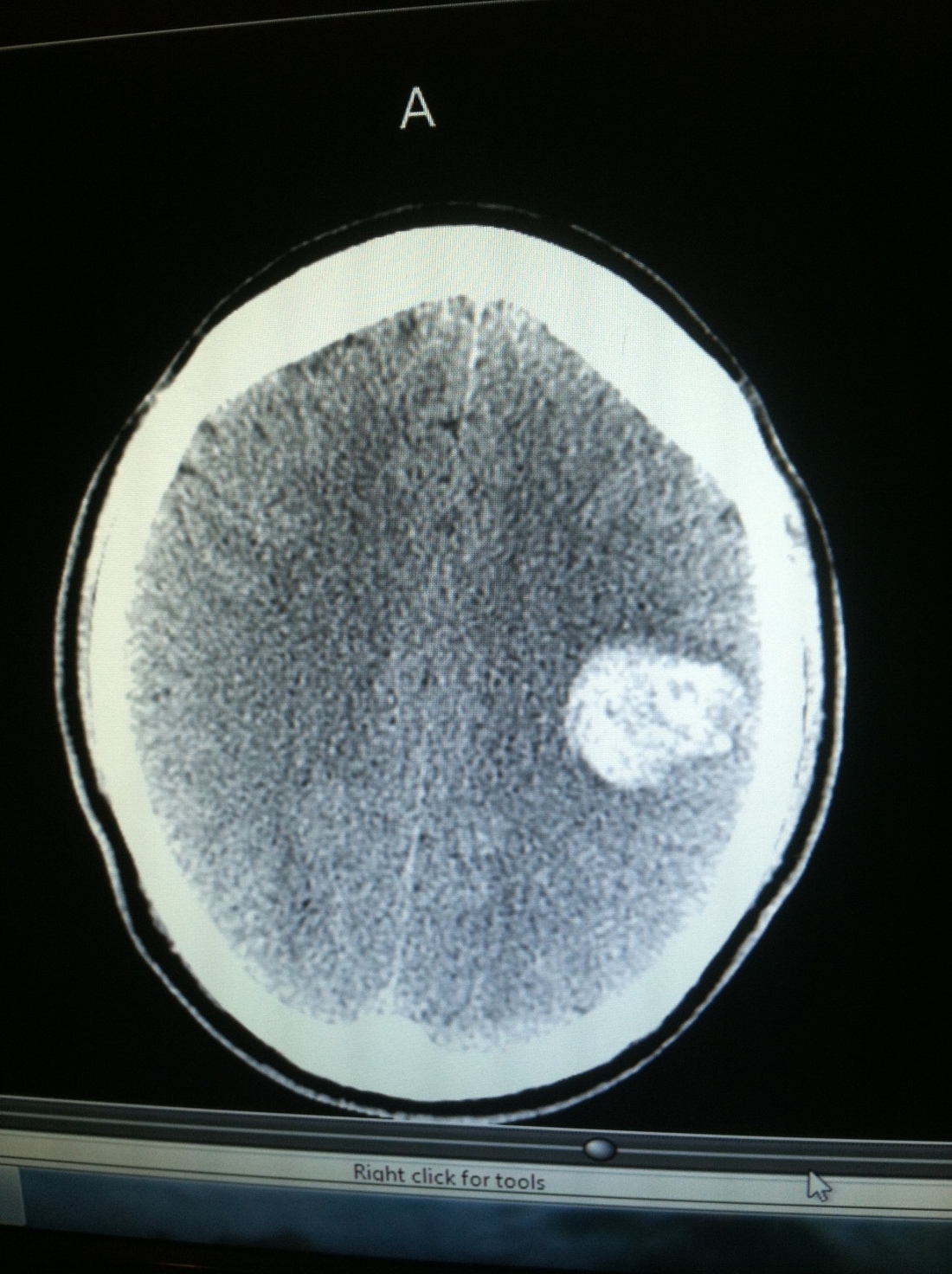 As I looked down at my best friend, and then back to the image of his brain, tears pooled in my eyes.  Dave could still hardly speak, he had no feeling on his right side, his brain had an active bleed, but against all odds, I felt him squeeze my hand with his right one and say, I love you.  It was more like a pained whisper and the faintest of squeezes, but he was speaking, attempting to make his right side work, awake and so very alive!

Dave was stationed directly outside the nurse’s station in the Emergency room of the new hospital.  There was so much activity in and out of his room as they waited on pins and needles for him to take the turn for the worse that the doctors were all expecting.  But, Dave refused to give in to the sleepiness that called his name. He held my hand with his strong left one like it was his lifeline. He sat in that bed and refused to give up – to him, closing his eyes and going to sleep, even though he was so very tired, felt like giving up.  He refused to leave me!

After almost 5 hours of monitoring him every 10 minutes, accessing neurological function, another repeat CT scan and so much lab work trying to figure out what was going on and why this had happened, they notified us that they were once again going to be transferring Dave to another hospital – the 3rd one that day.  His insurance was Kaiser, and so they wanted to get him to the nearest Kaiser facility to continue monitoring him.  Thankfully, this time they were willing to transport him via ambulance and we got to ride together 🙂

We arrived at the Kaiser hospital and they admitted him directly to ICU to give him one on one nursing care as his condition was still so unstable and very critical.  Within a few minutes of arriving in the ICU, the neurosurgeon arrived and assessed Dave’s current status. Dave had not shown any signs of decline in the past 5 hours but the size of bleed that he had experienced in the location of the brain that it had occurred was very much life threatening.

The doctor gave it to us straight. He didn’t understand why Dave was even conscious, much less coherent. In his experience, these types of bleeds had a very small survival rate. If Dave made it through the night, we would re-access in the morning and do an exploratory brain operation to see if they could identify the source of the bleed. If there was a sudden turn for the worse in the night, they would proceed with the emergency brain surgery, that thankfully had been postponed for more than 8 hours at this point.

Because of the paralysis that Dave was experiencing on his right side, he wasn’t allowed any food or drink.  They needed to do a swallow study and have the feeding therapist evaluate him to minimize the chances that he would choke on anything orally.  Also, because he may have surgery at any moment, they needed him prepared and ready to go under anesthesia.

It was going to be a long night, but I pulled a chair up right next to my best friend, grabbed his hand and we settled in to watch and wait and pray.  Finally, after almost 14 hours since he had first called me, Dave let himself rest. I didn’t sleep at all that night – praying constantly that Dave made it through the night and defied the odds that the doctors were putting on him.  ‘Please, God, let Dave live.’ That was my prayer and the miracle I was expecting. I didn’t even care at that point that he ever walked again, I just couldn’t imagine life without him.

I had no idea what the future held as I sat in that hard hospital chair and held Dave’s hand throughout the night.  The home we were building, the future we had envisioned, the dreams we were chasing – that all seemed so distant as I looked around at the multitude of machines monitoring Dave’s every breath and heartbeat.  I didn’t know what this new adventure looked like, but I knew that we were going to experience it together…

Published by that tiny life love

Hi ~ My name is Jaimie, and I am a wife to Dave, mama to amazing humans and a blue weim. Our tiny life loving journey started almost 5 years ago when we had a crazy dream to build a shipping container home in Southwest Washington. Since then, we have learned so much about living tiny, living simple, living healthy & chemical free, perma-culture and gardening. The best part is, we are still discovering and learning new things every day! Our hope that by sharing our journey & story, we can help others discover the joys of the tiny life and how to make it sustainable for you and your family. View all posts by that tiny life love

This site uses Akismet to reduce spam. Learn how your comment data is processed.